A major holiday of the dvarsh calendar, tazl atuz’thl’, Freshing Day, is a day to throw open homes and minds, sweep out the stale, and welcome what is fresh. Traditional menus include spring greens, new peas and whatever winter stores are left. After a day spent cleaning house and old thinking, communities take to the streets with spray bottles of water for a spritzing free-for-all. At midnight, everyone goes home to get out of wet things. Tazl atuz’thl’ usually falls on May 23, Gregorian style.

Dvarsh: An Introduction is a remarkable book. In Prelude to a Change of Mind and Nod’s Way, Stikmanz creates a misty world — possibly our own — cohabited by the dvarsh, thrm, and the occasional hoomanth’m (human). In this compendium, Stikmanz brings the dvarsh, a cousin species to humans, into focus by inventing for them a functional language, complete with grammatical and phonetical rules, an extensive vocabulary displayed in two dictionaries — English to Dvarsh and Dvarsh to English — and a wealth of proverbs and aphorisms that serve to deepen our understanding of and affection for these wise creatures. As if that weren’t enough, he also develops a dvarsh script that is an intricately functional work of art. Here is a graphic of just two of these handcrafted characters and the explanation of their relative categorisation into ‘falling’ or ‘rising’. 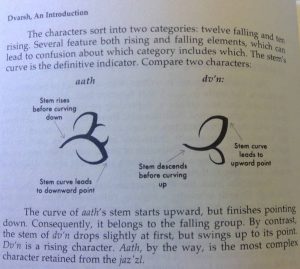 From DVARSH, AN INTRODUCTION. Image capture by Nancy Salay.

And here is a description of the script: “The forms of the jayĕlu, like the jaz’zl from which it derives, were inspired by plant shapes: leaves, buds, thorns, and berries. Written lines may go left to right, right to left, top to bottom, bottom to top, in spirals, winding switchbacks, or whatever. Words and texts are imagined and often discussed as a living vine. One always reads in the direction “the vine grows.” This metaphor has been worked to death in dvarsh poetry.” (p. 29) That dry, extremely subtle, wit is trademark Stikmanz and there are hidden gems of it throughout this work.

Dvarsh: An Introduction is Tolkienesque in atmosphere, magnitude, and scope. If you are looking for literary fantasy, put it on your list … it is a must read.

Nancy Salay is an Associate Professor in the Department of Philosophy and the School of Computing at Queen’s University, Canada. Her central area of specialization is embodied cognitive science with a focus on language and representation. Informed by embodied, enactive, and extended insights as well as predictive processing models of cognition, she is developing an externalist, learning-based account of mental representation.

Best Creator of a New Language

Your purchase supports the continuing work of Robert Stikmanz.